Nurturing value based journalism for promotion of truth, culture and nationalism to build prosperous powerful and proud Bharat.

Bharat Prakashan is a Public Limited Media House started by common people who became the founding shareholders of the company with a cause.  Pd. Deendayal Upadhyay Ji, being the founding Managing Director, the company for last 75 years has been influencing the National Policies & Educating the masses through values-based journalism reflected in the weeklies- Panchjanya & Organiser.

Showing great adaptability and resilience, the media house has diversified itself and now catering to more than 7.9 million National & Global audience through new age media platforms. Our brands have a unique positioning due to authenticity & rigour about Social, Cultural, Political and Economic aspects with the Nationalist perspective. 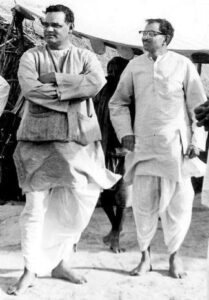 Pt Deendayal Upadhyay and Shri Bhaurao Deoras were the inspiration behind this initiative, started with the contribution of more than 16000 shareholders.

Shri Ashok Singhal, Shri Kedarnath Sahni, Shri Sohan Singh, Shri Bajrang Lal Gupta, Dr Harsh Vardhan, etc. have been the guiding force as members of director board of the company at some or the other point.

Organiser faced banned twice, in 1948 & 1975, and also was under censorship scrutiny in 1949. Organiser fought the case in the Court of Law which was instrumental in promulgating the First amendment to the Constitution of India, pertaining to Freedom of Speech and Expression.

In 2014, the weeklies were transformed from Tabloid format to the magazine one.

Since inception, both the weeklies have raised the voice for unheard sections, whether for Hindu refugees from Pakistan or displaced Rakhin tribes from Mizoram.

Standing for truth with national perspective is the hallmark of Organiser & Panchjanya, that is why parliamentarians, other media houses and policy makers take cognizance of what is being published in the weeklies.

It is not surprising that the ORGANISER is often quoted in Parliament, a host of national journals and is widely read in UK, USA, Canada, and 54 other countries of the world.